All Human Life is Precious

Posted on February 20, 2013 by JustMEinT Musings 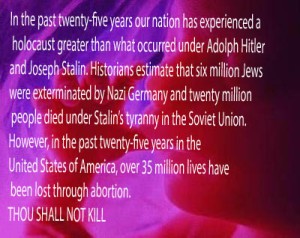 Ask a room full of people when they believe human life begins and you are likely to get lively discussion. Most people though seem to agree that when the sperm impregnates the ovum, a new life begins – except if you are a pro-abortionist, and you will get a range of different answers.

Answers that range from six weeks, to six months, to actual delivery/birth seem to suit those who favour destroying what has been created within a woman’s womb. And then there is the school of thought that believes as babies have no ‘moral relevance’ you should be allowed to terminate their lives – just as you would if you were sanctioning or performing an abortion.

It certainly makes one ask What Price a Human Life and just who defines moral relevance?

An article from so-called experts (drips under pressure) states:

Parents should be allowed to have their newborn babies killed because they are “morally irrelevant” and ending their lives is no different to abortion, a group of medical ethicists linked to Oxford University has argued.

That says it all really – killing your baby is no different to having an abortion. That is what pro-lifers have been telling the world for a very long time. They (the anti abortion lobby) have a strict and unwavering moral code – a code of ethics – that believes all human life is sacred. That life may be made through a loving intimate relationship or through a savage and cruel act of defilement (rape), the outcome is still another human life. For eons they have professed that abortion is killing. Abortion is the taking of a human life. Abortion is murder. Now the so-called experts agree that ending that life through unnatural means is murder.

Did they say ‘murder’? No they said ‘Killing babies is no different from abortion’.

What would happen to you if you or another person deliberately killed a baby? Beat it to death, suffocated it, starved it…. killed it. You would be arrested tried and found guilty of infanticide / murder.

In the case the ‘experts’ are discussing here,  the baby would be one that was born defective but they also argued for any unwanted child to fit the bill.

This is after birth abortion – or more correctly infanticide. MURDER!

Only this past week I received and email telling me that:

In a recent article in Salon.com to coincide with the 40th anniversary of the US Roe v Wade abortion decision, Mary Elizabeth Williams conceded that life begins at the moment of conception. However, she maintains that the choice of the woman takes precedence over the life of the baby. She concludes her essay, “And I would put the life of a mother over the life of a foetus every single time — even if I still need to acknowledge my conviction that the foetus is indeed a life. A life worth sacrificing.”

We need to know how these people who support abortion actually think – and what is behind their arguments.

Albert Mohler responded to the article, in a piece titled, “So What if Abortion Ends a Life? Rare Candor from the Culture of Death”   He wrote, “The question is horrifying, but the argument was all too real. In a recent article, Mary Elizabeth Williams of Salon.com conceded what the pro-life movement has contended all along — that from the moment of conception the unborn child is undeniably a human life. And yet, Williams argues that this unborn human life must be terminated if a woman desires an abortion. The child is a life, but, in her grotesque view, “a life worth sacrificing.” . . .

Now that the pro-abortionists have finally come out and agreed that human life (life) begins at conception, they have to find another way of promoting their evil act – so that it will fit in with today’s morally corrupt society.

They will define new life as having no moral relevance. A baby cannot think for itself, cannot feed itself, make any decisions or choices for itself – so therefore it is irrelevant!

O How low we have fallen that even the precious gift of a new-born, given to us to nurture – is irrelevant and no more that a screaming, defecating, morally irrelevant bundle of skin, bones and corpuscles. Therefore we can eliminate it from the gene pool if we do not want it. So long as we do it before they become morally relevant. I wonder what age they have in mind? 1 month, 12 months, 18 months, seven years?

You know years ago we allowed our governments and their bureaucracies to impose on us abortion on demand. We did not take a strong stand against this crime of killing unwanted babies. Today it almost seems a non issue – it just happens!

Now  the same thing is happening with euthanasia – the so-called mercy killing of sick end of life individuals. Once more those with no consciences, whose moral judgments are corrupt, are steering (specifically) Tasmania, but the entire nation of Australia towards legalizing this morally reprehensible act – under the guise of humanism – and euthanizing terminally ill patients who request this act.

The Tasmanian Government protests that all care will be taken never to allow any pressure to come to bear on feeble elderly and incapacitated Tasmanians to have their lives ended in this manner. Quite frankly if ethicists can present plausible arguments to end the lives of unwanted or deformed babies because they are not morally relevant – how long do you think it will take for them to come up with arguments in support of ending the lives of elderly, incapacitated, demented, bed wetting/defecating relatives, who are a drain on the fiscal burden of both the family and State? Surely they too would be considered morally irrelevant?

All I can say is God Help US Please. Yes I am a Christian and I write this knowing many will disagree with me. We have become morally corrupt and we are a sinful nation.

Further reading:   All Life is Precious

5 Responses to All Human Life is Precious