Arpad Pusztai – heard of him?

Posted on October 19, 2012 by JustMEinT Musings

A Lesson From Overseas 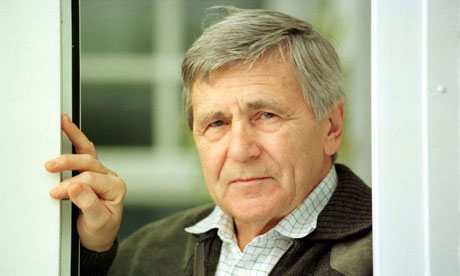 When eminent scientist Arpad Pusztai went public about his accidental discovery that genetically modified (GM) potatoes severely damage the immune system and organs of rats, he was suspended from the prestigious Scottish research institute where he had worked for thirty-five years. He was silenced with threats of a lawsuit while the Institute denied or distorted his findings.

In the ensuing war over public opinion, biotech advocates tried to spin the science in favor of GM foods, but were thwarted at each attempt by leaked documents and compelling evidence. Pusztai, who describes this chapter as “the most thorough and accurate report on the topic,” was ultimately vindicated when his potato study was published in the Lancet. His remains the only independent safety assessment in a peer-reviewed journal. It contrasts sharply with the handful of published industry studies, an analysis of which reveals how they were designed to avoid finding problems.

When Susan answered the door, she was startled to see several reporters standing in front of her. Several more were running from their cars in her direction and she could see more cars and TV news vans parking along the street.

“But you all know that we can’t speak about what happened. We would be sued and—” [6]

“It’s OK now,” the reporter from Channel Four Television interrupted, waving a paper in front of her. “They’ve released your husband. He can talk to us.”

Susan took the paper. “Arpad, come here,” she called to her husband.

Arpad Pusztai (pronounced: Are-pod Poos-tie), a distinguished looking man in his late sixties, was already on his way. As his wife showed him the document, the reporters slipped past them into the house. But Arpad didn’t notice; he was staring at the paper his wife had just handed him. He recognized the letterhead at once—The Rowett Institute, Aberdeen, Scotland. It was one of the world’s leading nutritional institutes and his employer for the previous thirty-five years—until his sudden suspension seven months ago. And there it was, clearly spelled out. They had released their gag order. He could speak.

The document was dated that same day, February 16, 1999. In fact, less than twenty minutes before, thirty reporters had sat in the Rowett Institute press conference listening to its director, Professor Phillip James, casually mention that the restrictions on Dr. Pusztai’s speaking to the press had been lifted. Before James had finished his sentence, the reporters leaped for the door. They jumped into their cars and headed straight to the Pusztai’s house on Ashley Park North, an address most were familiar with, having virtually camped out there seven months earlier. Now those thirty reporters, with TV cameras and tape recorders, were piled into the Pusztai’s living room.

Arpad Pusztai read the document—twice. As he looked up, the reporters started asking him questions all at once. He smiled, and breathed more easily than he had in a long time. He had all but given up hope. Now he finally had the chance to share what he knew about the dangers of genetically engineered foods.

The story of Arpad Pusztai made headlines throughout Europe for months, alerting readers to some of the serious health risks of genetically modified (GM) foods. It was barely mentioned, however, in the U.S. press; the media watchdog group Project Censored described it as one of the ten most underreported events of the year. [7] In fact, major U.S. media avoided almost any discussion of the controversy over genetically modified organisms (GMOs) until May 1999. But that was all about saving the monarch butterfly from GM corn pollen, not about human food safety.